And Now, Weekend Services with Our Lord and Saviour, Barack Obama

Posted by Rev. Right at 12:06 PM
We here at America is an Obamanation have been so excited about the Messiahpalooza Tour this week, we forgot to blog!

Sorry about that, but to make it up to y'all, let us now have an online mass of thanksgiving. Can I get an Amen from the congregation? 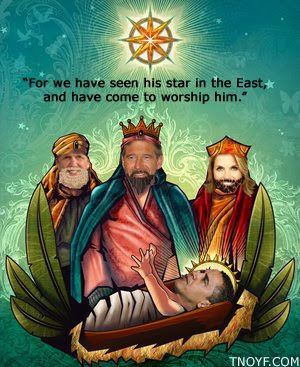 
First off, let us bow our heads in prayer, led by Sister Pam Meister of Blogmeister USA (click on it to read the whole thing):

Our Obama, who art in Washington
Flip-flop be thy name...

Thank you, Pam. And thanks be also to Brother Aaron for the e-mail tip!

Now, a reading from the Prophet Gerard Baker of the (London) Times Online:

And it came to pass, in the eighth year of the reign of the evil Bush the Younger (The Ignorant), when the whole land from the Arabian desert to the shores of the Great Lakes had been laid barren, that a Child appeared in the wilderness.

The Child was blessed in looks and intellect. Scion of a simple family, offspring of a miraculous union, grandson of a typical white person and an African peasant. And yea, as he grew, the Child walked in the path of righteousness, with only the occasional detour into the odd weed and a little blow.

When he was twelve years old, they found him in the temple in the City of Chicago, arguing the finer points of community organisation with the Prophet Jeremiah and the Elders. And the Elders were astonished at what they heard and said among themselves: “Verily, who is this Child that he opens our hearts and minds to the audacity of hope?”...

Be certain to read the whole thing! h/t to Brother V the K.

And now, our sermon by none other than the Obamessiah Himself, the greatest orator that ever lived! (With an assist from Brother Rush, as well as the Smash Mouth Tabernacle Choir and Brothers Shrek and Donkey.)

h/t for that embed to Brother Van Helsing.

And now, please join our Messiah in singing our closing hymn with accompaniment from Brother Paul Shanklin, One Night in Baghdad.

Our services have now ended. Go forth in peace to love and serve Obama! Amen!