Posted by Chase Michaels at 9:28 AM

I hear that comedians, TV personalities, and Jon Stewart are having problems about joking about The One.

That is an outrage! So you are telling me that these "comedians" are giving hours of valuable free air time to the GOP and John McCain while they are completely ignoring Sir Barack Obama! How is this remotely fair?

I have put some Obama jokes together for the likes of Jon Stewart, free of charge. Just stop giving the GOP non-stop free airtime by joking about how McCain is old, you Republican hack.

Joke 1
Why did Barack Obama cross the road?
Because there was not a body of water nearby for him to walk over.

Joke 2
Did you hear that Obama is currently in the Gulf?
Yep, Mexico has no idea what to do with him.

Joke 3
Did you hear Obama wants to supply the Marines with 1,000 new septic tanks?
When they learn how to drive them, he wants to use them to invade Pakistan.

Joke 4
How many Obama fans does it take to change a lightbulb?
Twelve - 1 to blame it on Bush, 4 to form a committee, 6 to find and pack the bong, and 1 to call an electrician.

Joke 5
Have you heard that joke about Obama?
Well odds are he has, because his ears are freaking huge. 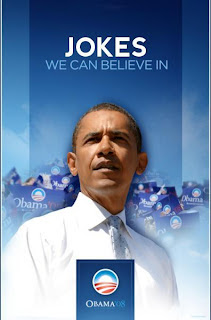 Do you have any other Obama jokes? Post them in the comments.

The problem is Obama is just so funny on his own,

You should see what happens when he is interviewed by Clem Kiddlehopper.

You can read this salient interview on my post, "Obomber and Me" at:http://riggword.wordpress.com/2008/04/15/obomber-and-me/

black comedian Kat Williams does some funny schtick on Obama, but then again he's black and he's allowed to joke on a black man, w/out fear of losing his career and being run out of the country.

Obama walks into a bar.