Posted by Chase Michaels at 1:54 PM

I recently signed up for emails from my main man. The Baaaraaaccck OOOOObammma! How cool is that? He emails me like 10 times a day asking if I have checked out his website, if I want to kick in some more fundage, and if I want to earn some ca$h by claiming to The Enquirer that I had an extra-marital affair with John McCain and fathered a child from said relationship.

Barack Obama is about to make one of the most important decisions of this campaign -- choosing a running mate.

You have helped build this movement from the bottom up, and Barack wants you to be the first to know his choice.

Sign up today to be the first to know:

You will receive an email the moment Barack makes his decision, or you can text VP to 62262 to receive a text message on your mobile phone.

Personally, if I were his VP choice - say my name was "Evan Bayh", I'd want to be the first to know if I were Obama's VP choice and I'd be pretty mad if I found out that Obama texted Chase Hussein Michaels first.

Anyway, I signed up for his text messages. I got my first one today, but it had nothing to do with a VP choice. 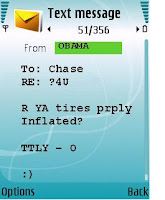