This morning, Republicans tell me that a worker at Invesco Field in Denver saved thousands of unused flags from the Democratic National Convention that were headed for the garbage. Guerrilla campaigning. They will use these flags at their own event today in Colorado Springs with John McCain and Sarah Palin.

Before McCain speaks today, veterans will haul these garbage bags filled with flags out onto the stage — with dramatic effect, no doubt — and tell the story. 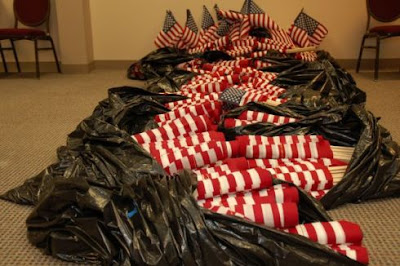 “What you see in the picture I sent you is less than half of total flags,” a Republican official emailed. “We estimate the total number to be around 12,000 small flags and one full size 3×5 flag.”

I’m not sure what the DNC was supposed to do with unused hand-flags, frankly. But the Republicans are obviously questioning someone’s patriotism here.

But, wait a minute... didn't I see something similar in my e-mail box the other day, too?

For two days RedState has been at the Democratic Convention trying to find American flags.

Sure, when the television cameras come on for prime time network coverage, the Democrats have been passing out flags like candy.

But when the prime time lights are not on, and for the entire time Tuesday night, including during prime time, there have been no American flags: not in the crowd, not on the stage, not in the hallways -- nowhere.

They were in the trash. 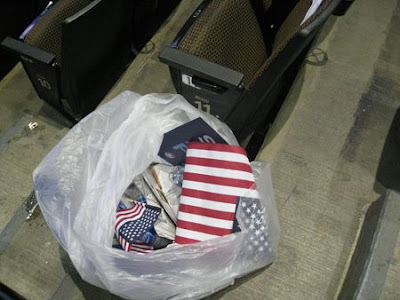 Let's skip, for a minute, that this is supposed to be an environmentally friendly campaign and the flags were thrown in with paper, plastic, food, and other junk. Ignore that. 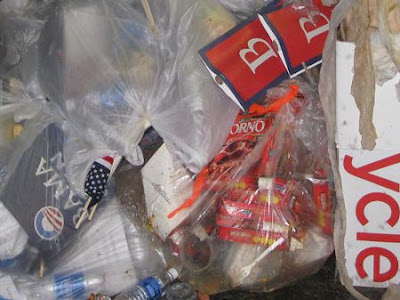 Just focus on this: The Democrats only pulled out the flags for prime time Monday night and Wednesday night. They have otherwise avoided all displays of the American flag.

After Wednesday night, they threw them in the trash.

And I suppose that gives you the right to question Democrats' patriotism? There is nothing as patriotic as hating your own country when it's run by fascist neo-con crackers! It's our duty to hate such a country!!!

So what? Next y'all'll be trotting out that picture of Obama's friend Bill Ayers again. It means nothing! 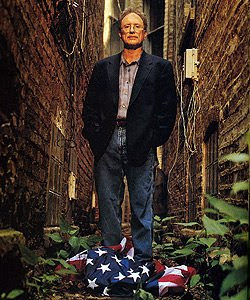 It's not like the Messiah Himself ever showed any disrespect to that stupid rag you neo-cons get so hot and bothered over... 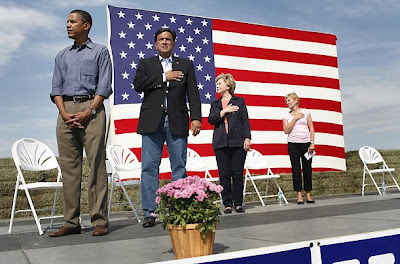 Looks like "Faux News" has piled on (h/t Gateway Pundit):

Note to the rest of the media: Bury this, quick! We are counting on you to keep a lid on this... don't let your precious Messiah down!!!

Damon Jones, spokesman for the Democratic National Convention Committee, released a statement saying McCain should applaud the fact that thousands of American flags were “proudly waved” at their convention.

“But instead his supporters wrongfully took leftover bundles of our flags from the stadium to play out a cheap political stunt calling into question our patriotism,” he said.

Why, of course we weren't just going to throw all those flags away! We had already planned on recycling them!

Just look at some of the lovely products we were planning on selling made from all those stolen flags, that now, sadly, will never be made...