"Welcome back to The Factor. Our next segment tonight: Is the Democrat nominee to fill the Late Ted Kennedy's Senate seat in Massachusetts blowing what seemed just a couple of weeks ago like a sure thing due to an unbelievable slew of campaign gaffes and missteps, or is there something even more nefarious going on here? You be the judge."

"Here to discuss the situation with us tonight is one of Martha Coakley's key campaign advisors, one Mister... Lark Evor... am I pronouncing that right?"

"Yes, Bill, that is correct. Thank you for having me on tonight."

"Thank you for coming on The Factor tonight, Mr. Evor... I must say, you look awfully familiar, have we met before?"

"No, sorry, Bill, I don't believe so, but you would be surprised by how often I get that very same reaction from people."

"I'll bet... Look, Mr. Evor, I've got to say, this campaign you guys are running up there in Massachusetts... it's almost as if you folks are doing everything you can to intentionally throw this election, am I wrong?"

"Well, Bill, every campaign will have some setbacks every now and then, but we believe we are running a good campaign and that, in the end, the people of Massachusetts will reward us with a well-earned outcome on election day..."

"You can't be serious! A good campaign? By what standard can this be considered a good campaign? You guys misspelled the name of the state in one of her campaign ads, for chrissakes? Do you guys have that graphic? Throw it on up there for the folks..." 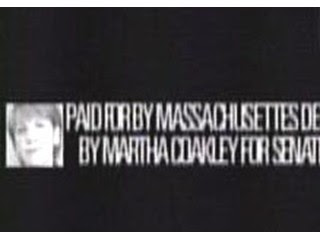 "They tacked an 'E' onto the end of the state's name there, can you see that? How does an ad like that get approved for air? Did anyone even look at that thing before they sent it out? How can you miss something like that?"

"Well, as I said, any campaign will make a few little mistakes..."

"A few little mistakes? Okay, how about the ad in which you lambaste your opponent for not caring about Wall Street greed with his face super-imposed over a photo of the World Trade Center?" 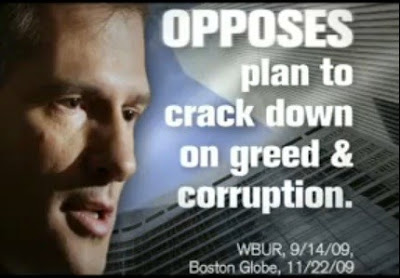 "Is that a little mistake, too, Mr. Evor? Almost 3,000 Americans died at that very site a little over eight years ago, sir, couldn't that be considered a little... I don't know... insensitive?"

"And what about your candidate's claim during a televised debate that there are no more terrorists in Afghanistan? Afghanistan??? We just suffered a suicide bomber attack on a CIA compound there on New Year's Eve, for crying out loud? How do explain that one away?"

"Oh, obviously! And your candidate's statement that Catholics shouldn't work in emergency rooms due to their religious objections to abortion and contraception, how did that go over in the second most Catholic state in America by percentage?"

"I think they likely agree with her, Bill."

"Oh, they agree with her, do they? And do they think it's okay to send around pamphlets making the outrageous claim that your opponent would deny all rape victims any medical treatment? There's not even just a bit of distortion there, I'll bet!"

"And I suppose your candidate having one of her aides shoving reporters asking inconvenient questions to the ground right in front of her, and then claiming to know nothing about the incident is nothing to be concerned with either?"

"He was just looking out for her, Bill, the reporter tripped."

"Right... he tripped... right after the guy pushed him. And how in the world can this woman be so ignorant and out of touch as to scoff at the idea of a candidate shaking hands with the folks outside an iconic public venue as revered up there as Fenway Park, and then a few days later go on a radio talk show and call heroic Boston sports figure Curt Schilling a Yankees fan? A Yankees fan??? Curt Schilling??? The man who literally put the 'Red Sock' in Red Sox just a few short years ago? Against those same much hated Yankees??? I just cannot believe that this woman could live in the state of Massachusetts and make that kind of a blunder, I mean... come on! You guys really just have to seriously be throwing this election! No one could be this incompetent! No one!"

"Like I said before, Bill, all campaigns make mistakes..."

"Right. Mistakes. So, now that the polls show a tight race, and many of them even have you behind in a race you were supposed to win in a blowout just a short time ago, what do you plan to do now?"

"Well, we have President Obama coming to the state to stump for her, and we'll even be handing out some adorable little Martha Coakley hand puppets at the rally. In fact, Senator Harry Reid was good enough to model one of them for us on the Senate floor just the other day..."

"Do we have a picture of that to put up there?"

[Bill laughing] "And you mean to tell me you believe that in the political environment in which we find ourselves today, you think this is a positive image for your candidate??? That this is the way you want the voters to see her? As a puppet for Harry Reid???"

"I think it looks cute, Bill. And I think the people of Massachusetts would agree with me that it is just the image of Martha Coakley that suits her best."

"And you still deny you are trying to throw this thing?"

"Honestly, Bill, I'm doing all I can to see to it that the right candidate wins."

"Well, I guess I can't disagree with that! Thanks for coming on tonight, Mr. Evor. And, folks, it's like we always say: We report, you decide..."

Hey! - I thought this was a clever bit, nicely put together. Looks like it may be a pain to leave this comment, but if I don't have to jump through too many hoops, I'll come back.