DAY-UM! A BLACK man done stole the nomination from the WHITE, entitled woman!!!

Posted by Father Pfleger at 9:46 PM 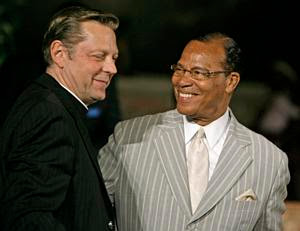 Straight outta the south side of Chicago, y'all!

Now, I may be suspended by my Archbishop - or as I prefer to call him, The Man - but that doesn't mean I can be silenced! This is the greatest sin against God!

Hillary doesn't understand our, I mean, your plight as black people! What is wrong with that cracker bitch?! Why can't she just say right here, right now, that Jesus, I mean, Barack is the nominee?!

And now Barack is goin' up against John McCain! WHERE DID YOU COME FROM?! How dare he run against Barack?! Democracy is irrelevant! We need to make up our sins by electing Barack Obama President of the United States of AmeriKKKA!!!

DO IT FOR THE BLACK JESUS!!!