A Few Words of Advice from El Ché 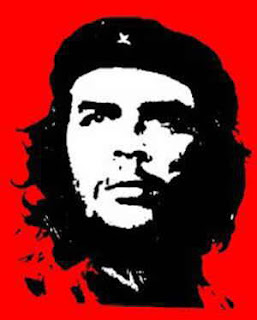 Ola, my fellow Obamites, it is none other than I, the great hero of the oppressed, El Ché, blogging to you undead and in person from the bowels of the underworld!

I will be taking a few minutes out of my busy schedule every now and then (between my frequent colonics with swarms of angry wasps and chiggers) to offer some unsolicited advice to my good friend and fellow Revolutionary, Barack Obama. See, I know a little something about Marxist revolutions myself, and take it from El Ché, they are no picnic!

First of all, you will need to control the media in order to control what the mindless masses are permitted to see and hear, a task which I see you have well in hand. What I am at a loss to figure out is, how did you accomplish this with such great ease? Are the American media that weak-minded and pathetic an adversary? It boggles the mind...

Anyway, as much as you have already accomplished sending thrills up the legs of sissy men, you must subdue that element of the media that will not voluntarily submit to your mighty will. I think you know of whom I speak. Talk radio will be easy prey once the Socialist Democrat controlled Politburo Congress is seated along with you as their Premier President in January, as the groundwork is already being laid to silence it with the brilliantly (if ironically) named "Fairness Doctrine" --- I tell you it is such a thing of beauty!

Silencing all opposing points of view under the guise of "fairness" is pure genius, even Josef Stalin is envious of that idea! He was fawning over it just last month as we both endured several hundred hours of having our eyeballs shaved and then slowly baked from the inside with acid. Why, I even have it on good authority that Satan himself was gushing over the whole concept as he personally sodomized Chairman Mao with his razor sharp barbed phallis not long ago, so kudos on that idea!

Fox News will be trickier to bring down, but I have much faith in you, muchacho! I suggest you speak at great length with our good mutual friend Hugo Chavez on this matter. He dealt with a similar situation rather brilliantly not long ago. I am certain that if you heed his advice, Bill O'Reilly and Sean Hannity will be dwelling in cardboard boxes under the el tracks with the rest of the American peasantry before you know it!

Then, there are those pesky bloggers. I am certain that with some creative regulation, the victorious American Socialist Party... uh, I mean the "Democrats" (wink, wink) can find a way to silence the dissenters while still managing to leave the useful sheep who sing your praises on the World Wide Web unaffected. For help on this matter, I suggest you look next door to Canada, where their Human Rights Commission (wink, wink) has been making great strides in similar endeavors!

Oh, before I run, I must say, this lovely lady who campaigns for you down in Tejas is muy caliente! 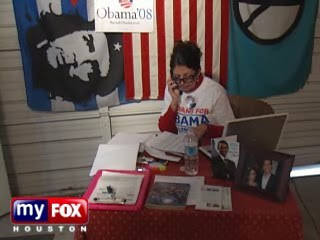 I must hand it to you, my brother, you have some major cajones to be flaunting your relationships with so many far-left radicals so openly, but you have so much gravitas and such a fawning press, no one seems to notice or care!!!

Sorry, but I must be off for now. I do not want to be late for my disemboweling with the white hot poker again. Last time I was late, I had to endure 1,000 extra sessions and let me tell those of you lucky enough to never have experienced such a thing, you do not wish to be given even one extra session!

However, if I have to explain to you how to make a valid email address out of that, he doesn't want to hear from you!

Also, if he responds at all, it will be on the pages of this blog, where he is liable to make an ass out of you, so be warned. Now bugger off, he's busy!

Try to get that guy to tone it down, a little.

I'm putting you on my blogroll.