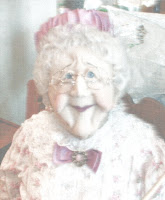 He's won! I hyperventilated so hard on Tuesday night that I didn't wake up until today. The staff here at the home were very worried!

He's on TV now. He said he's going to have to rent his house out for the Olympics in 2016 and he's going to be finishing up his second term as President then! He said Mayor Daley will still be Mayor then too! I'll be 88 then.

This is just sooo exciting!