Posted by The Speaker Is a Madame at 9:16 PM 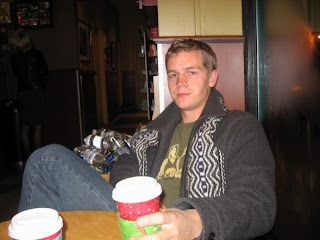 College students across the nation are expressing disappointment in Sen. Joe Biden, Barack Obama's running mate for the 2008 election.

In fact, these "Rock the Voters," who were expected to put down their video game controls, iPhones and double skim soy mocha lattes long enough to pull the lever for The One on November 4 (and thus change the demographics of voting for decades to come), are not only disappointed but horrified that Obama would risk his "cool" factor in order to add some gravitas to his ticket.

Among the complaints about Biden are his age, his membership in Hair Club for Men, his inability to tell the difference between MySpace and Facebook, and the fact that he's willing to campaign in 7-11s. (7-11 does not sell free trade coffee and caters to blue collar workers by selling hot dogs, Slushees, Moon Pies and other items that have a cool factor of zero. Plus, there's nowhere to sit and plug your laptop in for free WiFi service.)

"What the hell was he thinking?" asked a tie-dye bedecked Brian Stack, head of his local World Can't Wait chapter, president of the Che Guevara Fan Club and member in good standing of the Star Trek "Friends of Seven of Nine" Assocation. "The guy's like, 80 years old or something." (Biden will be 66 in November - ed.) "And he has hair plugs! Can you imagine the two of them going on vacation together in Hawaii? The idea of Obama body surfing with this old wrinkly guy is just embarrassing." When asked if Biden's long tenure in the Senate would be an asset to his candidacy, Stack blinked. "The Senate? Is that, like, in Washington or something?"

Jane Moore, a junior at Wellesley (Hillary Clinton's alma mater) who is majoring in Wymyn's Studies and is a member of Code Pink, is equally dismayed by Obama's choice for VP. "Hillary was cheated, but Barack could have made it up to her by choosing her as VP. But since he didn't do that, the least he could have done was pick a guy like Evan Bayh. I mean, Bayh is pretty hot! Just thinking about having two hot guys in the White House makes me want to...excuse me, I'll be back in a few minutes." She returned with a flushed face. "Okay, you were saying? Oh right, Biden. Ugh. For a while I thought Barack was all about being cool, about bringing in a new era of change in Washington, bringing a fresh, youthful outlook to things. Now I find out he's got someone older than my father as his running mate? I'm so disappointed. I'm sick of all these old people thinking they can run the country." When reminded that Obama himself is just a few years shy of 50, Moore was undaunted. "Well, he looks pretty good in a bathing suit! Excuse me again..."

"Where does he stand on the issues that affect me?" John McVeigh asked while manning a "Get Tested Now!" table set up in the quad at Wesleyan University. "I mean, stuff like legalizing drugs, being able to stay on my parents' insurance past age 25 if I'm still in school, interest-free student loans and getting rid of the need to sign up for selective service are all pretty important to me. Who gives a crap about his foreign policy credentials?" he asked as he adjusted his pony tail and smoothed down his flyaway goatee. "And what the f*** is up with his hair? God, I hate old people. They're just so stupid."

It's unknown at this point how serious the backlash of the youth vote can be for an Obama-Biden ticket. Polltakers have been stymied by their inability to garner information from potential voters age 18-25 because either they are too busy updating their Facebook pages, downloading music onto their iPods, playing video games, watching The Daily Show or hitting their parents up for more money.