Posted by Marathon Pundit at 10:53 AM 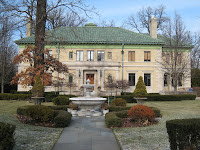 Roll up, roll up for Marathon Pundit's tour,
Roll up, it's the Obama-Chicago tour...
With apologies to the Beatles.

Several local media outlets have speculated about an expected bump in tourism for America's Obama's adopted home town of Chicago. And in the spirit of civic duty, I've put together an itinerary of what I believe are the must-see Obama sites in Chicago and beyond.

And away we roll!

Let's first stop north of the city, to the swank Chicago North Shore suburb of Wilmette. Pictured top is the mansion of Antoin "Tony" Rezko. Before Obama could become President-elect, he had to move out of the Illinois State Senate into something more substantial. In 2003, investor Blair Hull was the clear frontrunner in the polls for the Democratic Primary for the US Senate. Obama needed a lot of cash so he could be viewed as a viable candidate, and Rezko, Obama's first political sponsor stepped in and footed the bill for a fundraiser, one that included valet parking. Not that parking spaces are scarce on Rezko's street, but maybe the since-convicted felon was worried donors would drop their check books walking down the long driveway.

Rezko isn't living at his home, he's residing at the Metropolitan Correctional Center, 71 West Van Buren Street, in Chicago's Loop. It's pictured on the left. That's our next stop, but while Tony is in the building, you won't be. There is a "Tour Buses Not Welcome" sign on the front door of the MCC.

Now it's time for the tour to motor south on Interstate 94 to 1526 E. 55th Street on Chicago's South Side, the site of the former Hyde Park Co-op. The Co-op was a quasi-socialist operation which, at least in its latter days, specialized in providing a bad selection of groceries with high prices. Treasure Island, which touts itself as Chicago's most European supermarket, and it's an accurate claim, took over the location about a year ago. Merchandise is still expensive, but the quality of it is better. Obama is a supporter of union "card check," that is, allowing unions to be certified after a majority of workers sign a petition stating their wish to organize. Secret ballot--the American way--is how choosing unionization has been done in this country since the 1930s. The Co-op's workforce was unionized, but employees of the Treasure Island chain decertified its union last year--by secret ballot.

While there, passengers can stock up on rare cheeses, and an assortment of fine wines for the next time you entertain your liberal friends. 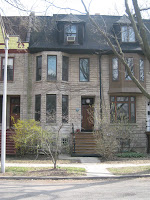 Check "Yes" on your card and then check out another Hyde Park landmark, the home of America's most beloved unrepentant terrorists, Benardine Dohrn and Bill "Bomber" Ayers. It was in the living rooom of that rowhouse where Obama's political career began. Hard hats and safety goggles will be available for all passengers. Watch out for flying debris.

Heading a little bit west, our next Hyde Park disembarkation point is the "House that Rezko Helped Buy," pictured on the right. Behind the green sign is the infamous "Rezko lot." Rita Rezko, Tony's wife, purchased the sidelot on the same day in 2005 that the Obamas closed on their Georgian mansion. Late that year, the future first couple bough a 10 foot stip of the Rezko property. 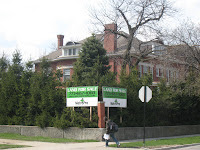 Even before Rezko, the Reverend Jeremiah Wright played a major role in Obama's development as the leader of the Cult of Change. Our final tour stop is the president-elect's longtime place of worship, Trinity United Church of Christ, 400 West 95th Street. It was here that the church's now-infamous former pastor, the Reverend Jeremiah Wright, told cheering throngs that the government Obama will soon lead created the AIDS virus to kill blacks, that we should not say "God bless America, but God d*mn America," and that an alternative manner of referring to our great land is "the US of KKK-A." 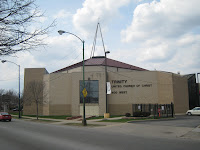 While approaching the church, passengers will be entertained by some comedy. Bill Moyer's puff interview of Wright will be playing from the video consoles on the bus.

DVDs of Wright's fiery sermons will be available for purchase.

Passengers should not expect a friendly reception from the residents living in Trinity's neighborhood. When your tour guide took the picture on the left, I had to deal with constant car horn blasts, as well as the determined waving of a disapproving finger from one elderly driver.

Okay, you may not be able to feel the love at Trinity, but you'll get a great sense os history when taking Marathon Pundit's Obama-Chicago tour, where you can hang out where Obama hung out.

Send all payments for the tour to the recently deceased Nigerian oil minister. And tell them The Chosen One sent you.