Posted by Rev. Right at 12:19 PM
Democrats in Congress were scrambling Tuesday to find a way to put an end to a new controversy swirling around Senator Roland Burris (D-IL). It now seems that the man who was recently appointed by former Illinois Governor Rod Blagojevich (Impeached Crook-Chicago) to fill the Senate seat vacated by Our Lord and Savior, President Barack Hussein Obama, may have lied under oath about discussing payment for said seat with the Governor's brother. Unable to trust the voters of Illinois to do the right thing and elect yet another liberal Democrat with the proper skin pigmentation to fill the hallowed seat in any special election that may yet result from the scandal, a proposal was made, instead, to have the seat permanently "retired" to honor The King of All Unicorns. The idea quickly picked up unanimous support among Democrats everywhere.

Not content to simply leave it at one seat, however, Senator Barbara Boxer (D-CA) soon put forth an even bolder proposal, "Just as Major League Baseball retired Jackie Robinson's uniform number for every team in honor of his breaking the sport's color barrier, we, too, must follow their example and retire one Senate seat from all fifty states in honor of President Obama's historic achievement in breaking the most important color barrier of all," she said in a speech from the Senate floor Tuesday.

"Here's how it will work," Senator Boxer explained. "Any state with two Democrats serving, other than Illinois, of course, will have both seats grandfathered in until one or the other Senator dies, voluntarily retires, or loses re-election, at which time the first such seat in each of those states to become vacated would be immediately and irrevocably 'retired' in honor of President Obama. In states which have one Senator from each party, the Republican seat would be immediately retired and in states represented by two Republicans, a panel of Senate Democrats will decide which one we dislike the least and retire the other one's chair forthwith."

"Think of the money we are going to save the American taxpayer by eliminating half the Senators," said Senate Budget Committee Chairman Kent Conrad (D-ND). "Half the salaries, half the expense accounts, half the staffs, half the perks... the savings could feasibly be expected to reach hundreds of millions of dollars annually. Why, you'd have to be a fiscally irresponsible nitwit NOT to support this idea!"

To celebrate this newly discovered windfall, the bill would also immediately quadruple the annual salaries, expense accounts, staffs and perks for all the remaining Senators, including those protected by the grandfather clause.

"What about the retired seats?" One reporter asked at a hastily assembled Senate press conference, "Do we just simply make do with fewer votes in the Senate for each bill?"

"The legislation has been crafted in such a way, that all the retired seats would still be allowed to vote in perpetuity in a way that most reflects the wishes of President Barack Obama," said a smiling Senator Chuck Schumer (D-NY). "This would presumably be accomplished during his lifetime with a simple phone call, email or text message whenever necessary. The method for determining his wishes on any particular piece of legislation after his passing would be a bit trickier, but the bill does provide several hundred billion dollars in annual funding for Ouija Boards, crystal balls and a team of professional mediums to be screened, selected and appointed by the NAACP, Operation PUSH, the Congressional Black Caucus, MoveOn.org and the Democratic National Committee."

Reaction from opponents was swift and vocal, but those in favor of it were eager to defend the move.

"Any and all objections to this landmark proposal are, of course, strictly motivated by racism," said NAACP spokesperson Phyllis Whitt-Dredd. "Fortunately the legislation will outlaw all future dissent over anything supported by the Barack Obama Seats as a prosecutable hate-crime."

The bill also immediately "retires" the chair of Supreme Court Justice Clarence Thomas in honor of the man who formerly held his seat, Justice Thurgood Marshall, who said through his NAACP appointed medium, Miss Claire Voyant, "I am truly honored and touched by this gesture. This is the greatest day of my afterlife. Oh, and I declare this bill fully and completely constitutional!"

Also attached to the bill is the Pelosi-Reid Amendment, which changes the legal definition of "bipartisanship" to "legislation crafted with input from Democrats in both the House AND Senate."

According to a statement issued minutes ago, Republicans Arlen Specter (PA), Olympia Snowe (ME) and Susan Collins (ME) have agreed to support the bill "in the spirit of political cooperation and racial harmony as well as an irrational but all-consuming fear of being glared at menacingly by certain members of the mainstream media and our Democrat colleagues if we fail to obey their every command."

Presenting our "Visitor of the Day" 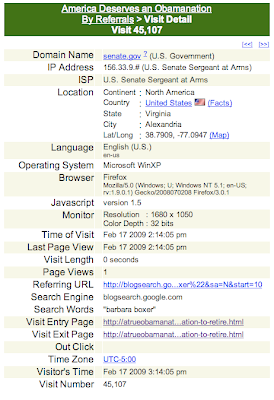