In light of recent revelations regarding the true nature of the threats to our way of life made clear in a recent report, we at the Department of Homeland Security have decided to change our focus from foreign terrorists to a menace of a decidedly more domestic nature. As a result, we felt some changes were in order.

First, there was the matter of our official seal. 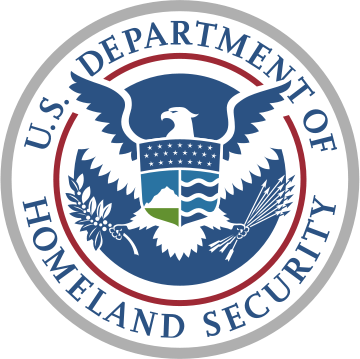 As you can see, it was not very politically correct. It looked far too warlike and menacing with that eagle, shield and arrows. Instead, we have had it redesigned to a much more friendly symbol, as seen below.

The beautiful little endangered Orwellian Fruit Bat was chosen by the Sierra Club and helps call attention to the plight of our delicate ecosystem. The moon symbolizes our vigilance to protect our wonderful new government, even in the dark of night, from those that would seek to undermine it. We have added a small yellow design of no real significance, which I am assured is an international symbol of peace and friendship. We have even incorporated the Obama campaign seal, a symbol that has come to be seen by millions as a beacon of hope and change.

While the new Administration may no longer feel threatened by the masses of undocumented future Democrats crossing our borders in unknown numbers or the many worshippers of the great and peaceful faith of Islam who may sometimes accompany them, we do feel there are, unfortunately, much more sinister threats staring all of us in the face... Conservatism and Libertarianism!

I wish to reassure all Politically-Correct Americans, that every possible step is being taken to protect our newly acquired power from the grasp of this creeping evil, but we must remain ever-vigilant, or a non-liberal Democrat may win an elected office in your area at sometime in the near future. To aid in our joint struggle against these extremists, we have updated the color-alert system developed by the previous administration and will be issuing advisories along with specifics about any known threats such as VFW meetings, future "Tea Parties" or Republicans shown within striking distance in any election poll.

As part of our efforts to warn the public about all possible threats to our New Age of Hope and Change, we have also created this Official Website Content Warning Badge, which all websites that contain politically objectionable content will be asked to display...

Compliance will be voluntary, at first, and then, much like the President's new GIVE Act, it will be made a mandatory sort of voluntary in the near future!

Those of you who have websites which feature politically incorrect thought, are asked to display one of the following badges in your sidebar...

Please link all badges back to this post and let us know you are in full compliance with the law by trackback, comment and/or email with a link to the blog(s) on which it is being displayed. Blogroll will be forthcoming, and DHS will begin monitoring all activities of those posting to, commenting on, or visiting these sites. Thank you for your cooperation.

Be certain to keep an eye on this individual, as he is clearly one of the most dangerous radicals of all!

Blogs in compliance with displaying their sidebar warning badges:

Hasenpfeffer Incorporated
A TowDog's Blog
The Hill Street Blahg
IMAO
Grandma's House
Too Much Liberty
The Conservative Dominion
Is Anybody There?
The Macho Response
Paladin's Page
I Saw the Right
Something Aint Right
Against All Enemies, Foreign and Domestic
Health Care to Die For
Mockazine
Conservative Firestorm
Semper Bellatoris
The Hostages
Stix Blog

Badge displayed, but not linked correctly yet:

*If you want to appear on my sidebar blogroll under the badge, make sure to link to me in your sidebar through (or very close to) the badge and I'll add you to the list!*

Posted a badge at The Hostages. Thanks!

Put the badge up at Stix Blog
http://blog.stixblog.com