Save the Polar Bears, Save the World

Posted by The Mighty Goracle at 3:35 PM 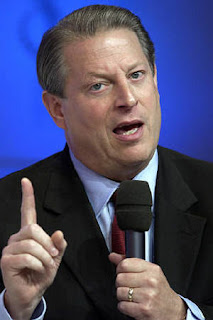 My fellow Americans, I would like to take this opportunity to wish each and every one of you (except those of you in Florida) a happy Earth Day!

As you know, our planet is quickly dying. Burning to a crisp, a charred ball of cinderous ashes hanging silently in space, due to cow flatulence, S.U.V.'s and hair care products. We can still save it, but we must act together and we must act now!

Think about it. What will you tell your grandchildren some day in the not too distant future, when we're all dead and they are never born because you couldn't turn down your thermostat, walk those few measly miles to and from the grocery store with your arms full of heavy grocery bags, and eat delicious meals of tofu and bean curd instead of meat and animal byproducts? What will you say to them then?

Nothing. Because we'll all be dead and they will never have been born.

But it need not happen!

Today, I am announcing a new initiative to save this planet from an untimely end. Several months ago, I came up with an idea to save one of nature's most precious natural resources: the polar bear.

As you know, these majestic and beautiful creatures are dying out due to the cruel destruction of their habitat by man-made global warming. They are running out of sea ice at the North Pole, which will be completely ice-free within the next few years. As a result, the polar bears are plunging into the sea and, since they are unable to swim, they are drowning at the rate of hundreds each day!

To put an end to this senseless tragedy, a team of scientists and myself developed a new life vest designed especially for polar bears! It is called the "Wildlife Saver."

To put our plan into action, a team of volunteers and myself set out with a small documentary film crew to fit as many of the bears as we could manage with these miraculous new life saving vests.

It was a grueling adventure. At one point, my boat began taking on water and I had to try to bail it out as best I could before the film crew and I were tossed into the sea! As you can see from the picture below, captured by one of the volunteers in a nearby boat, it was quite a harrowing moment! 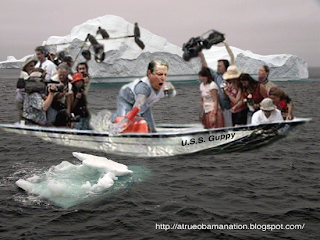 Unfortunately, my heroic efforts were less than successful. I had to be taken aboard the other boat while the film crew was left to be scalded to death in the nearly boiling hot waters of the Arctic Ocean! It was a terrible moment. After all the months of planning, there we were at the North Pole without a film crew. When that boat sank, so did my heart, for with it went any chance of another Oscar! Oh, well.

Soldiering on, the rest of the volunteers and I did manage to find some polar bears, and almost a dozen of those brave souls lost their lives trying to get the new vests on just a small handful of the bears. 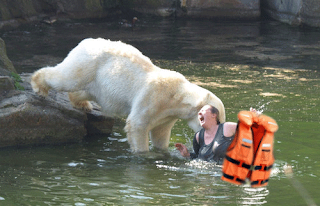 But I would dare say even they believe it was well worth it!

Sadly, we can't do it alone. We need more money and, of course, more brave volunteers.

Every minute that goes by, another of these majestic creatures is lost to the sea forever.

Please help us today by joining up for the next rescue mission, or sending a generous donation made payable to me, Al Gore.

Thank you, and may Mother Gaia bless and keep us all.

A special thanks to this guy.