Hey guys, Chase here. Cutting away from watching Ladies Olympic Beach Volleyball to talk about why we should elect Obama.
Reason Number 6: Georgia on my mind
Recently I turned on the news and found out that Russia had invaded Georgia! I watched in horror and they parachuted in, had the Cubans and Mexicans invade through Texas. We stopped them in the Midwest, while a group of locals - led by Patrick Swayze staged a courageous guerrilla campaign. - I later realized that I was actually watching Red Dawn on HBO.

I also found out that breakaway Russian provinces name themselves after our states. How confusing and relieving at the same time.

After my little anxiety attack, I got high. Then I checked in to see how President-in-waiting Obama was handling the situation. He held a press conference in Hawaii. Check it out.

I bet Russia backs down just because Obama is so cool, he has to wear a jacket while in Hawaii. 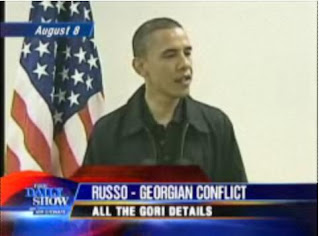 Barry probably wore a jacket cuz he's packing a 357 magnum... Do you feel luck punk? Well do you?