Posted by Chase Michaels at 3:34 PM

Hey guys, Chase here. I was up late last night watching the VMAs and have another reason why you should vote for Obama in November.

Reason Number 8: Unfunny Wanker Comics for Hope (and some spare change)
A recent Gallup poll shows that McCain had a little bounce following the book-burning escapade they called a "convention". My cousin was at the convention, you may have seen her. She's in Code Pink and likes to shout "DOWNBUSHINHITLERREGANDOUCHE" at people. To be fair, she used to shout like that when she was younger, but that was when she rode the short bus to school and pooped in her 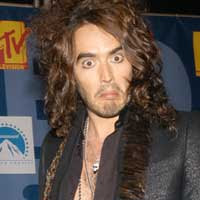 pants. Despite what her parent's said, I didn't find her very special.

Speaking of poop, let's talk about the next big bounce of this convention. The Russell Brand Bounce!

Who is Russell Brand? He's only the greatest political mind to come from Britain since Russell Crowe. I hear he's also a comedian, which I didn't pick up on last night at the VMAs.

Here is a sample of the political prose he laid down last night:

"Please elect Barack Obama on behalf of the world...Some people - I think they're called racists - may not be ready to elect a black man. It was nice of you to let that retarded cowboy have a go at it."

He also addressed teenage pregnancy by claiming that Bristol Palin's pregnancy was a political stunt and that kids should be punished for getting pregnant at that age by being forced to become Republicans.

WOW! How is this guy not popular in America? Given to how American television blatantly rips-off everything from the UK, it should be any day that Russell Brand is given a sitcom on NBC.

American would be wise to listen to great political minds like P. Diddy, Sharon Stone and Russell Brand. They obviously know more than you. Plus, if you don't vote for Obama...you're a racist.